You are here: Home › Invitations and Stationery

1985 was the first year The Paperbag decided to add personalized invitations and stationery to their unique mix of products.  Imagine, the first birth announcement that was done at The Paperbag in 1985, she came back for her wedding invitations because her mother always brought her in from the day she was born!

The Paperbag carries the finest and largest selection of invitations and stationery in the Lehigh Valley.  You are invited to stop in and browse the incredible selection.  If you have an idea for a party, let them help create the perfect “first impression”.

Your invitation sets the tone for your entire event.  The paper, your choice of words and the style of your invitation all send an impression to your guest as to what they can expect.

The Paperbag carries a variety of companies that have different types of printing, Letterpress, Thermography, Engraving and Flat (digital or off-set) Printing. 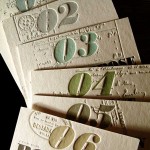 Letterpress is the oldest form of printing where ink is applied to the raised portions of a metal or hard plastic plate which is then pressed on the paper or other substrate. Letterpress printing may also be used for producing small quantities of business cards, letterhead, posters, and some forms.

The rise of “digital letterpress” in the 21st century has allowed boutiques and invitation shops to avoid the limitations and complications of acquiring and composing metal type. The goal before this revival was that you could not tell there was an impression, the type contacted the paper enough to transfer the ink but not leave an impression. However today, when speaking of letterpress, the goal is to have that impression be evident, to distinctly note that is letterpress. 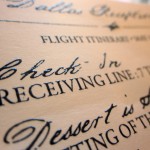 Thermography produces raised printing similar in appearance to engraving but using a different process. In thermography, a special powder is added to the ink printed on the paper. The printed piece is heated and the powder and ink mixture dries to form a raised effect on the paper.

One of the easiest ways to tell if a piece has been printed using thermographic techniques is by the uneven quality of the text, which is a result of the process and easily differentiates thermographic printing from engraving. 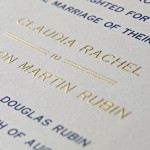 In engraving, a metal die with an impression cut into the surface is filled with an opaque engraving ink then pressed against paper creating raised areas of the paper coated with ink. Engraving creates the raised surface on the front of the paper.

Examples: Used for fine wedding invitations and sometimes business cards and letterhead, the raised effect of engraving is similar in appearance to thermography without the glossy look. 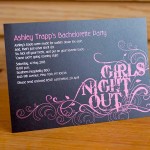 Examples: Lithography may be used in fine art printmaking. Offset lithography, one of the most commonly used commercial printing processes for most desktop publishing projects, uses the lithographic process.

The Paperbag carries a large selection of stationery in store as well as personalized stationery to match your personal style.  From sophisticated to whimsical, from children’s stationery to your grandmother’s stationery, they have the perfect set for you.

Personalized Stationery makes a wonderful gift.  Who wouldn’t want their name in print?  Stop in soon to pick your own personalized stationery or to give as a gift.

Read all of our Party Favors, Wedding Announcements Reviews at

Want to keep up with the latest information from The Paperbag?